Celebrating their 30th anniversary in operation, DDC invites every team member, across all locations, to perform local acts of service that accumulate to 30 days over a 12-month period.

The worldwide business process outsourcing (BPO) network, The DDC Group, will officially mark three decades of operation and is celebrating by giving back on a global scale. Having accomplished major milestones for BPO and the industries in which it serves since 1989- from Charity and Utilities to Transportation, Medical, Finance and more-  the company is rallying its teams worldwide for a unique initiative that defies borders for good.

As part of DDC’s 30th-anniversary celebrations, the company is democratizing its corporate social responsibility (CSR) efforts with its new, international ‘DDC 30 Days of Good' program. Between August 1, 2019 - July 31, 2020, every team member from each division, across all locations, is called to participate in local acts of service on behalf of the company.

"We are encouraging our teams to use this initiative as an opportunity to give back to their communities, to do good where they live and work," said Jan Trevalyan, CEO of The DDC Group. “This is a truly global effort to make an authentic, tangible impact.”

The DDC Group has over 7,000 team members operating in approximately 12 locations throughout North America, UK, Europe, and Asia-Pacific, including:

According to Trevalyan, activities for the DDC 30 Days Of Good are selected by the participating staff. “We want our people to choose causes close to their hearts,” he explains. “The power is in their hands to make a difference where it matters most to them.”

CSR has been a core value of DDC’s since its founding.

Over the past 30 years, the company has performed countless acts of service and presented numerous donations to support a diverse range of initiatives for good in all areas where their teams live and work- from building private treatment rooms in government hospitals and filling libraries in schools, to creating a 501(c)(3) organization to fuel the rehabilitation and recovery of the Philippines after the 2013 typhoon Haiyan. 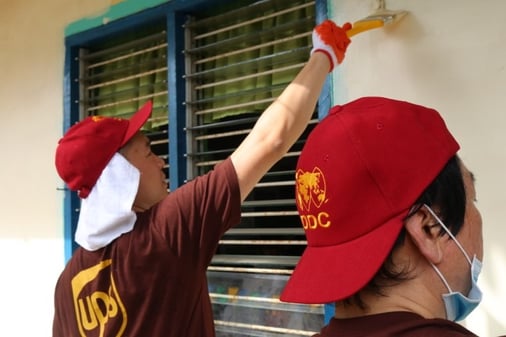 Earlier this year, DDC partnered with client UPS Global on a separate CSR initiative, repainting elementary schools in the province of Leyte and delivering 1000+ backpacks and hygiene kits to their students.

The Yabba Dabba Doo, established by CEO Jan Trevalyan, is a recurring annual fundraiser that occurs every November with a different beneficiary selected each year. The 2019 event will raise funds for The Christie NHS Foundation Trust in Manchester, UK.

During the 30 Days Of Good program, DDC will share activities as participated in by its team members worldwide on the company’s social media accounts. To follow along, visit DDC on Facebook, Twitter, and LinkedIn.

To learn how we can support you, contact us today.