Which BOL You Should Use? 5 Common BOL Types & Why They Matter 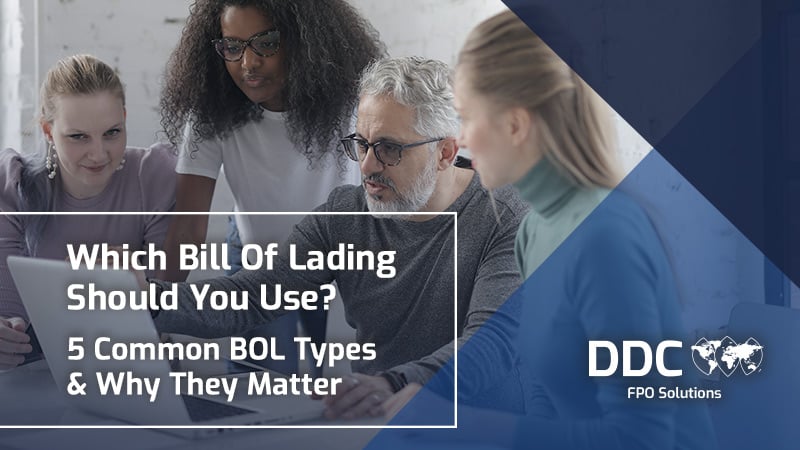 As the most important document in the shipping industry, the bill of lading provides all the pertinent information that logistic providers need to process a shipment and invoice it correctly. In addition to serving as the official evidence of contract, receipt of goods, and document of title, each different bill of lading type has unique features that hold the power to effectively move goods through the shipping lifecycle.

The bill of lading (BOL) is arguably the most complex documents in logistics. Each type of BOL serves its own distinct purpose, and knowing when and how to use the right template of the document can get confusing, especially when there are other requirements to adhere to (like freight classification, packing requirements, etc.).

To help, our freight billing experts have identified 5 common types of BOLs and how they  each play their own specific role in successful freight delivery:

1.To Order Bill of Lading

A To Order BOL is considered the original copy and is usually used in conjunction with a Letter of Credit to help with a safe transfer of goods between the buyer and seller. This BOL is used when payment is not made in advance and when the shipment is considered negotiable (meaning that the owner is transferrable, and the end-user hasn’t been determined).

Here are 3 common identifying markers found in a To Order Bill of Lading:

This type of BOL is also referred to as a “Consignment BOL” and is used when shipping goods to a customer when the items have already been paid for.  According to efinancemanagement, a straight bill of lading is a document in which a seller agrees to use a specific transport option to ship goods to a certain location, and the bill is then assigned to a specifically named consignee. Due to its non-negotiable nature, it cannot be assigned to anyone but that party.

The straight bill of lading includes the type, quantity, and quality of goods and can eliminate the demurrage and detention charges since the original BOL doesn’t need to be presented to obtain the goods.

A Claused BOL is used if the cargo is damaged, has missing quantities, or anytime a BOL deviates from what the receiver expects. This is sometimes referred to as a “Dirty Bill of Lading”, “Unlean Bill of Lading” or “Foul Bill of Lading”.  This BOL, as the nicknames suggest, is considered highly unfavorable, and can jeopardize the relationship between the shipper, carrier and often the receiver.

Communication is key in avoiding a Claused BOL, and it’s important that all parties are on the same page so that the receiver of the goods gets what they were anticipating. A clean BOL is like a clean bill of health and should always be the goal.

The Electronic BOL digitizes and replaces the core functions of a paper bill of lading. Instead of physically handing the interested parties a piece of paper, the digital version acts as a replacement for the hard copy. It is sometimes preferred because of the following benefits:

This type of BOL is sometimes referred to as a Transferable BOL and is used with the intended end customer is yet to be determined while in transit. This document allows the shipped goods to be delivered to anyone person in possession of the original endorsed negotiable bill.

Here is an example from Investopedia of how a Negotiable BOL works:

In contrast, a Non-negotiable BOL identifies a specific consignee, receiver, or buyer to whom the goods must be shipped. Since A non-negotiable BOL does not represent ownership of the goods by itself, it must be accompanied by other documentation.

It is imperative that all the correct necessary documents are prepared and used in a successful domestic or international shipment. These are just some examples of the many different types of Bill of Lading, and it’s important for the shipper, carrier, and receiver to maintain open lines of communication in determining which BOL is best suited for the situation.

DDC processes 30% of all less-than-truckload bills of lading in North America. With our clientele representing half of the top carriers as ranked by revenue, we're pleased to share insight on this and other topics critical for business process management specific to this industry.

DDC FPO is a trusted strategic partner for transportation and logistics companies worldwide. Discover how we can help support your success.